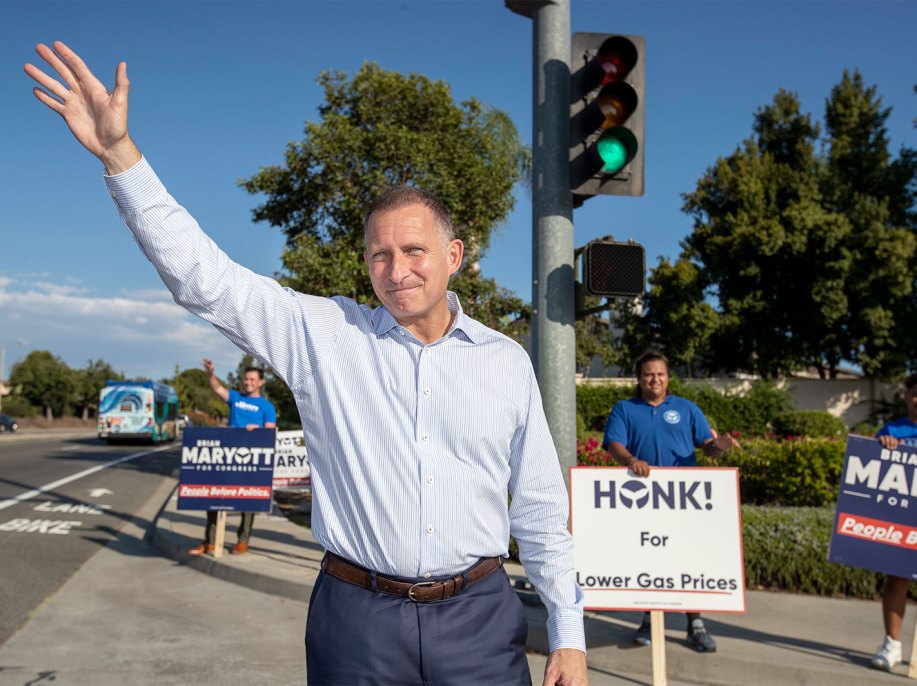 In 2018, Democrats flipped five Republican-held seats in and around the Los Angeles and San Diego metropolitan areas, including four that contained parts of or were entirely within Orange County, the historic base of the California GOP. But in 2020, Republicans won back three of those five seats, and this year — in an electoral environment that generally favors them — they’re hoping to not only hold onto those seats, but also capture more districts being defended by Democratic incumbents in Southern California.1

Following redistricting, however, there are no surefire pickups for the GOP, as the potentially endangered Democratic incumbents in the region are defending seats that are at least 5 percentage points more Democratic-leaning than the country as a whole, according to FiveThirtyEight’s partisan lean.2 As things stand, the Democrats in those seats are favored to win reelection. However, we’ve seen things continue to improve for the GOP nationally: FiveThirtyEight’s 2022 midterm forecast now gives Republicans an 85-in-100 shot3 of winning a majority in the House. Under these circumstances, the upper-end range of outcomes for the GOP could include wins in some blue-leaning seats in Southern California.

Beyond the political environment, Republicans could make inroads in these districts because they aren’t necessarily as blue as they seem based on the 2020 presidential vote alone. That’s because some voters in this region are still more inclined to vote Republican down-ballot. Looking at House incumbents running in potentially competitive seats,4 we can see how this played out in 2020, as the Democratic incumbents mostly ran behind President Biden and the Republican incumbents ran ahead of former President Donald Trump, as the table below shows.

U.S. House incumbents seeking reelection in Southern California districts that are between D+20 and R+20, by their partisan lean, forecast rating and 2020 margin compared with their party’s presidential candidate in the same district


Over/underperformance data uses the two-party vote and is based on the vote under congressional district lines used in 2020. Other data based on new districts being used in 2022. Rating based on FiveThirtyEight’s “Deluxe” forecast as of 5 p.m. Eastern on Nov. 3, 2022.

Partisan lean is the average margin difference between how a state or district votes and how the country votes overall. This version of partisan lean, meant to be used for congressional and gubernatorial elections, is calculated as 50 percent the state or district’s lean relative to the nation in the most recent presidential election, 25 percent its relative lean in the second-most-recent presidential election and 25 percent a custom state-legislative lean based on the statewide popular vote in the last four state House elections.


This degree of Democratic underperformance was atypical. Across the country, Democratic incumbents in the House ran about even with Biden in 2020, on average, although there were plenty who clearly ran ahead or behind him.5 But in Southern California, Democratic Reps. Mike Levin, Katie Porter and Julia Brownley all ran 4 to 7 points behind Biden, while only Rep. Raul Ruiz ran ahead of the now-president among the Democratic incumbents we’re looking at here. Meanwhile, most of the Republican incumbents in this group ran ahead of Trump, including the three Republicans who won back Democratic-held seats in 2020 — Republican Reps. Mike Garcia, Young Kim and Michelle Steel. Now, redistricting has changed the district lines since 2020, but we’re talking about Biden-supporting turf that in some cases backed Republican John Cox in the 2018 gubernatorial race, which now-Gov. Gavin Newsom won by 24 points statewide.

Among these Democratic incumbents, Levin had the largest gap between how he performed in 2020 versus Biden. Back then, Levin ran against Republican Brian Maryott, whom the Democrat defeated by 6 points, 53 percent to 47 percent. Now Levin is facing Maryott again in the 49th District, and as this seat only changed a little bit in redistricting, the race is largely being fought on the same light-blue turf that straddles the coastal border between Orange and San Diego counties — but in a better Republican environment.

The good news for Levin is that our forecast gives him an 86-in-100 shot of winning, buttressed in part by a late October poll from SurveyUSA/The San Diego Union-Tribune/ABC 10News that found Levin up 49 percent to 43 percent. Still, that result was well inside the margin of error, and the outside spending in this race suggests both parties view it as highly competitive: As of Oct. 24, the Democratic Congressional Campaign Committee and House Majority PAC had spent $3.3 million to aid Levin, while the National Republican Congressional Campaign Committee and Congressional Leadership Fund had poured in $3.4 million to help Maryott, according to data compiled by Daily Kos Elections. And heading into the final days of the campaign, Levin had over a $1 million to $430,000 edge over Maryott in his campaign account.

Just up the coast is Porter, who in two terms has become a high-profile member of the House thanks to her withering questioning in congressional hearings. Porter ran about 5 points behind Biden in 2020 while winning by 7 points, 53.5 percent to 46.5 percent, but while her new district has a partisan lean (D+6) similar to that of her old turf,6 a majority of the 47th District’s constituents are new to her: Only 41 percent of the people living in Porter’s old seat are in her new one, which is located entirely within Orange County.

As a result, Porter has needed to spend money to familiarize voters with her story and her record in Congress. Helpfully for her, though, Porter is one of the most prodigious fundraisers in the House, having raised $23.0 million and spent $24.4 million this cycle. Entering the last days of the campaign, she had $8.9 million in the bank to Republican Scott Baugh’s $139,000. Still, Republicans haven’t given up here, as the NRCC and CLF have tried to give Baugh a lift with $3.5 million in outside spending. Our forecast gives Porter a 77-in-100 shot of defeating Baugh.

In the suburbs north of Los Angeles, Brownley ran about 4 points behind Biden in 2020, but her largely unchanged district is far bluer than the seats Levin or Porter are running in. As such, our forecast gives Brownley about a 95-in-100 shot of defeating Republican Matt Jacobs, right on the dividing line between “solid” and “likely” Democratic. Yet recent reporting by Politico suggests Brownley is worried: She’s asked Democratic colleagues for financial assistance, based in part on internal polling that shows a close race (we haven’t been able to get our hands on those polls). The NRCC has now entered the fray, too, as it plans to make a “six-figure” investment in the seat. But Brownley did have about six times as much money in the bank as Jacobs ($1.9 million to $300,000) as of Oct. 19 and remains favored, although she may be in for a closer-than-expected outcome.

To the east, there’ve been few signs that Ruiz is in any danger in the 25th District. Ruiz is the one Democratic incumbent in this group who ran ahead of Biden in 2020, and although his district is a touch less blue than Brownley’s, his race has seen almost no outside spending. Moreover, Ruiz had $2.1 million in his war chest for the last weeks of the campaign, much more than the $19,000 Republican Brian Hawkins had. Our forecast gives Ruiz a 94-in-100 shot of winning, just shy of being rated as solidly Democratic.

Turning quickly to the Republicans who might be in danger, the main one is Garcia, who is seeking reelection in the new 27th District north of Los Angeles, which went from about D+5 to D+8 in redistricting.7 Notably, Garcia is facing Democrat Christy Smith, a former state assemblywoman, for the third straight time: He defeated her in a May 2020 special election to capture this seat, held the seat in the November 2020 general election by a 333-vote margin and now meets her again in 2022. And a third win could well be on his way: Garcia has a 65 in 100 shot of winning, per our forecast, and considering he ran 10 points ahead of Trump in 2020, it’s not as surprising he has an edge in this blue-leaning district. Moreover, there’ve been other signs Garcia is well-positioned, including the recent decision by major outside Democratic groups to cut their ad spending.

Democrats have also hoped to make inroads against Kim, Steel and even longtime Republican Rep. Ken Calvert, but each race is rated at least likely Republican in our forecast. On paper, Steel could be in danger in her race against Democrat Jay Chen in the new 45th District — it’s a D+5 seat and she currently represents only 16 percent of its constituents. But Steel has outraised Chen and has received $1.1 million in support from the NRCC and CLF, while Chen has received no outside help from the DCCC or House Majority PAC.

All in all, Democrats are on the defensive in Southern California. And while their most endangered incumbents are running in blue-leaning districts, the Republican-leaning national political environment and the tendency for some voters in this region to vote Republican down-ballot may give the GOP the chance to make further gains in the region.

Nov 3, 2022
Geoffrey Skelley
G
G
ThePollsters Republicans Have A Clear Path To Retaking The Senate In 2024