ThePollsters Who Will Control The House And Senate? Here’s What We Can Say At 4:30 a.m. 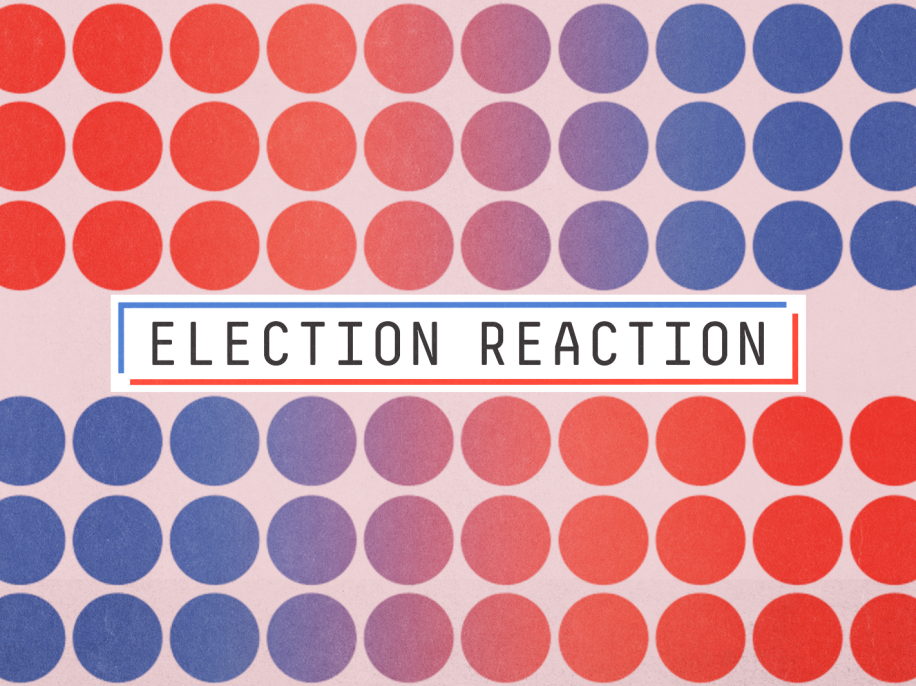 
It’s early Wednesday morning and we don’t yet know which party will control the U.S. Senate and House of Representatives. And based on simulations using FiveThirtyEight’s final forecast, the projections we do have suggest Democrats are now slight favorites to maintain their narrow edge in the Senate while ABC News estimates that Republicans have 207 seats to the Democrats’ 188, putting the GOP in position to win a majority. Still, it’s likely to be some time until we know whether those outcomes have actually happened and what the final numbers will be in each chamber. Let’s take a look at what we know and what remains unknown.

Coming into Election Day, Democrats and Republicans each held 50 seats in the Senate, but Democrats held power via Vice President Kamala Harris’s tie-breaking vote.1 To shift the balance of power, Republicans needed to win one net seat. But as things stand, the Senate will include 48 Democrats, 47 Republicans and the occupants of five as-yet-unprojected seats in Alaska, Arizona, Georgia, Nevada and Wisconsin. 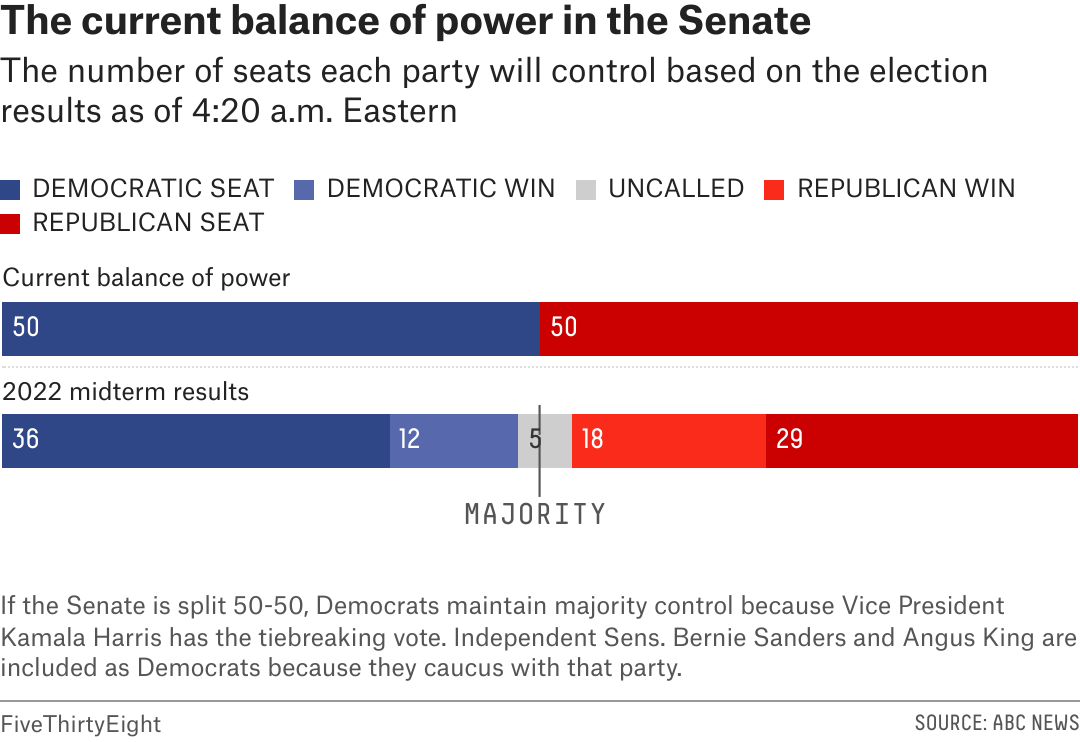 But one race where we do have a projection from ABC News is of critical importance to the Senate math: Pennsylvania. Earlier this morning, Democratic Lt. Gov. John Fetterman defeated Republican Mehmet Oz in Pennsylvania, capturing the seat held by retiring GOP Sen. Pat Toomey. As a result, Democrats just need to hold on to two of their three most endangered seats — Arizona, Georgia and Nevada — which significantly improves their odds of reaching 50 seats.

Of that trio of Democratic-held seats, Georgia’s outcome seems pretty clear at this point, too. That would be another runoff, for those who didn’t get enough of that last cycle, when Democrats won runoffs for both of Georgia’s Senate seats to capture the chamber. Democratic Sen. Raphael Warnock and Republican Herschel Walker are each right at about 49 percent, with a Libertarian candidate garnering the other 2 percent — enough to force a Dec. 6 runoff by preventing either Warnock or Walker from winning an outright majority.

The fates of Democratic Sens. Mark Kelly of Arizona and Catherine Cortez Masto of Nevada are more uncertain. About two-thirds of Arizona’s expected vote is in, and while Kelly leads Republican Blake Masters by about 7 percentage points, that margin should narrow further as more Election Day votes — which generally lean Republican — are counted. In Nevada, Cortez Masto trails Republican Adam Laxalt by about 3 points with around 80 percent of the expected vote reporting, but critically, most of the votes left in Clark County (Las Vegas) and elsewhere are mail-in ballots, which generally lean Democratic. Still, it will take these states some time to finish counting, so it could be later this week before we even know whether these seats will decide control of the Senate. (Both Wisconsin and Alaska look likely to remain in GOP hands, so we won’t go into them here.)

Turning to the House, Democrats entered the election with 222 seats to the Republicans’ 213, meaning the GOP needed a net gain of five seats to gain a majority. At present, Republicans are 11 seats short of 218, according to ABC News’s estimates, with 40 seats unprojected. But Republicans lead in many of those uncertain races, so it seems more likely than not that they will get there. 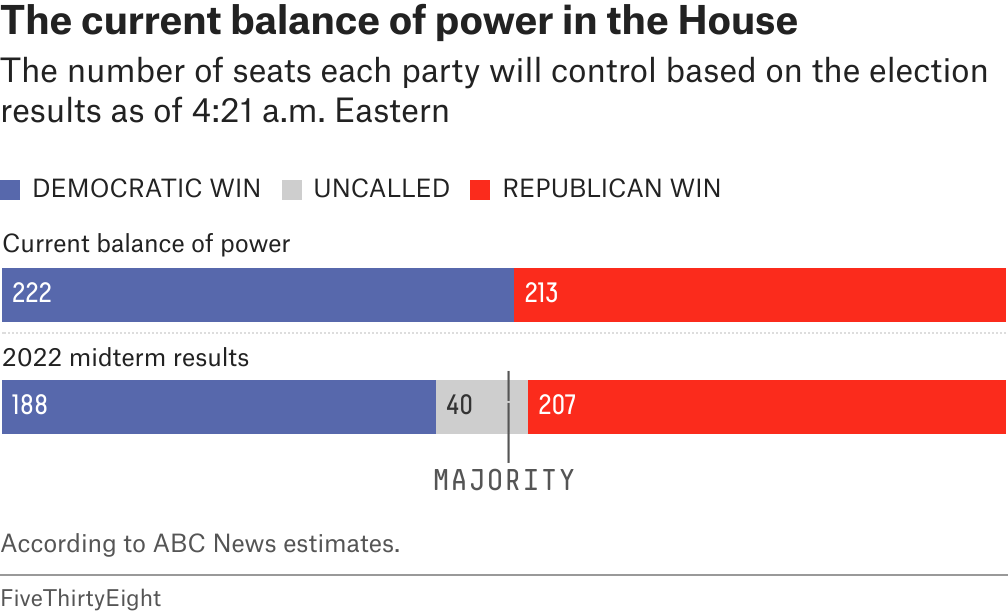 That we don’t have a final projection for the House suggests it was a fairly good night for Democrats. The president’s party usually does poorly in midterm House elections and President Biden has a mediocre approval rating, two factors that historically portend some ugly results. Despite this, Democrats won some seats that typically go for the party in the GOP’s position in a midterm, like competitive open seats (North Carolina’s 13th District and Ohio’s 13th District) and a purple seat held by a GOP incumbent in Ohio’s 1st District. And pivotally, Democrats held onto some highly competitive seats that might have fallen in a stronger Republican year, like Virginia’s 7th District, and some blue seats where the GOP had hoped to make inroads, like Rhode Island’s 2nd District. They also could manage to retain control of three competitive Democratic-held seats in Pennsylvania, although each race is very tight.

But Republicans are in line for a majority because they gained many of the seats they were supposed to capture, and they are also well-positioned to win some toss-up races as well as seats in which they were underdogs. Florida Republicans had a banner night, particularly in the House: They picked up a couple Democratic-held seats that GOP mapmakers made redder in redistricting (the 7th and 13th districts) as well as a couple of newly drawn, Republican-leaning open seats (the 4th and 15th districts). Elsewhere, the GOP flipped slightly red-leaning seats held by Democratic incumbents in New Jersey’s 7th District and Virginia’s 2nd District while winning two reddish, Democratic-held open seats in Tennessee’s 5th District and Wisconsin’s 3rd District.

The GOP could pick up a sizable number of seats from the outstanding races, too. The Northeast, especially New York, has a number of very tight races in Democratic-held seats that could go for the GOP, while red-leaning seats in Arizona and blue-leaning seats in California could potentially flip, although we are a long way from knowing the results in those places. Together, these should get the GOP over the 218-seat hump, but how far over remains to be seen.

We’ll be closely monitoring further developments in all of the unprojected races on our live blog, so please join us when you’re awake.

Dec 29, 2022
Maya Sweedler and Michael Tabb
M
N
ThePollsters Are The Democrats Screwed In The Senate After 2024?

Dec 8, 2022
Nate Silver
N
G
ThePollsters Final Forecast: The Senate And Most Of Its Key Races Are Toss-Ups