The Republican Path To A House Majority Goes Through The Suburbs​

Reintroducing our urbanization index for 2022.​ 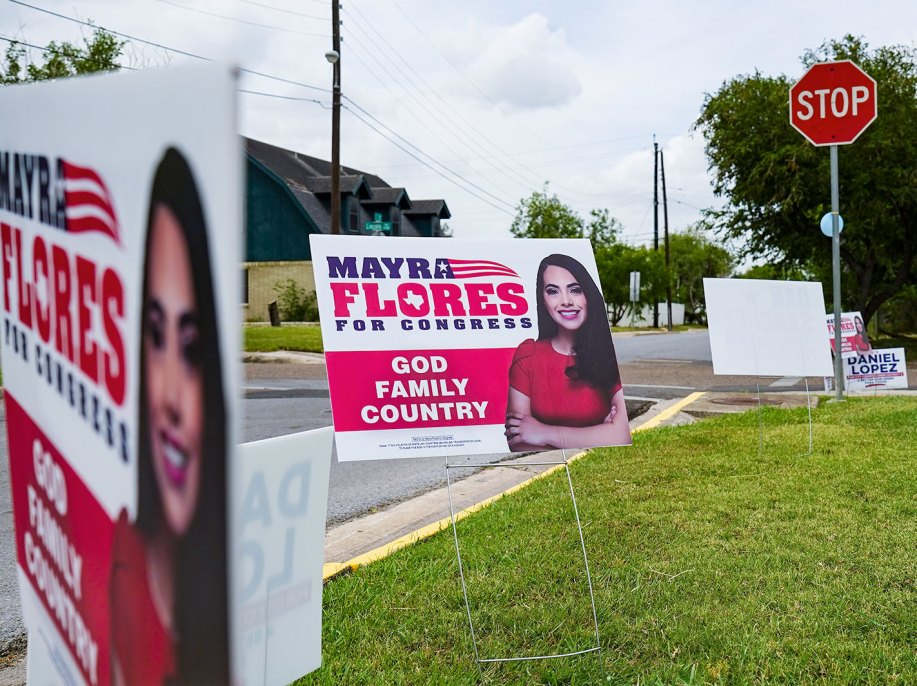 The race in Texas’s 34th Congressional District is one of many suburban-exurban districts that the two parties are vying for this fall.
DENISE CATHEY / BROWNSVILLE HERALD / AP


Two years after helping deliver President Biden the presidency, and four years after decisively handing control of the House of Representatives to the Democratic Party, Americans living in the suburbs are poised to once again play a major role in an election.

But after Democrats got the upper hand in suburban areas in 2018 and 2020, the pendulum looks set to swing back in the GOP’s direction in 2022 — at least to some extent. Most of the House races that will decide the election will take place in suburban and exurban districts: About 7 in 10 House races viewed as at least somewhat competitive — those not rated as solidly Democratic or Republican — are in predominantly suburban districts, according to in FiveThirtyEight’s 2022 midterm forecast.7 And Republicans, with better than a 4-in-5 shot of winning control of the House, according to the forecast, appear well-positioned to win a sufficient number of those seats to capture a majority.

To identify which seats are predominantly suburban, we categorized all 435 House districts using FiveThirtyEight’s urbanization index, which measures how urban or rural a district is.8 To help delineate the categories, we also considered the share of the population in each district that lives in places defined as rural, exurban or small town, suburban or small city, and urban core or large city.9 Using this information, we formulated six groupings that range from most dense to least dense: Dense Urban, Urban-Suburban, Dense Suburban, Suburban-Exurban, Rural-Exurban and Mostly Rural.10

About half the districts in the House are categorized as Dense Suburban or Suburban-Exurban, which we would expect given that more of the nation’s population lives in suburban areas compared with urban or rural ones. And in line with the higher level of electoral competitiveness in suburban and exurban areas, the average seat in these categories is notably less blue or red than its more urban or rural counterparts.

Suburban and exurban seats are the most politically competitive​

Congressional districts by urbanization index grouping, with each grouping’s average share of the population in rural, exurban, suburban and urban census tracts and the districts’ average partisan lean according to FiveThirtyEight’s metric


FiveThirtyEight’s urbanization index for congressional districts is the natural logarithm of the average number of people living within a five-mile radius of every census tract in a given district, based on a weighted average of the population of each census tract. Dense Urban seats have an urbanization index of 13 or higher; Urban-Suburban from 12.5 to 13; Dense Suburban from 11.5 to 12.5; Suburban-Exurban from 10.5 to 11.5; Rural-Exurban from 9.5 to 10.5; and Mostly Rural below 9.5. Population data is taken from the 2020 census.

Partisan lean is the average margin difference between how a state or district votes and how the country votes overall. This version of partisan lean, meant to be used for congressional and gubernatorial elections, is calculated as 50 percent the state or district’s lean relative to the nation in the most recent presidential election, 25 percent its relative lean in the second-most-recent presidential election and 25 percent a custom state-legislative lean based on the statewide popular vote in the last four state House elections.


FiveThirtyEight’s forecast rates 75 districts as at least marginally competitive; of those, 53 are either Dense Suburban or Suburban-Exurban. (All data in this article is as of Tuesday at 5 p.m. Eastern.) As things stand, the suburban seats that are rated as lean or likely GOP would get Republicans to 211 seats when combining that with races that are rated Solid Republican, and winning most of the toss-up districts in those groupings would then put them over the top. Tellingly, of the 15 seats that have at least a 2 percent chance in our forecast of being the “tipping-point” district — that is, the decisive 218th seat for a party’s House majority — 12 are either Dense Suburban or Suburban-Exurban districts. Republicans are favored to some extent in nine of them, although not a lock to win any.

Most competitive House races are in the suburbs​

Congressional districts by urbanization-index grouping and competitiveness rating according to FiveThirtyEight’s Deluxe forecast, as of Nov. 1 at 5 p.m. Eastern


FiveThirtyEight’s urbanization index for congressional districts is the natural logarithm of the average number of people living within a five-mile radius of every census tract in a given district, based on a weighted average of the population of each census tract. Dense Urban seats have an urbanization index of 13 or higher; Urban-Suburban from 12.5 up to 13; Dense Suburban from 11.5 up to 12.5; Suburban-Exurban from 10.5 up to 11.5; Rural-Exurban from 9.5 up to 10.5; and Mostly Rural below 9.5. Population data is taken from the 2020 census.


But that seat-by-seat count likely underestimates the GOP’s potential to capture suburban seats because the results in each district on Nov. 8 will not be independent of each other. That is, the swing to the right (or, less likely, the left) in a few districts will probably signal at least some shift in the same direction elsewhere. In our forecast’s simulations, the average outcome is 230 Republican seats, seven more seats than we get when we simply assign each seat to the party with the highest win probability. That’s because if Republicans win some of the swingiest seats where Democrats currently hold a slim edge, other highly competitive seats may also swing to the right. This is a reasonably likely outcome, too, considering the GOP now has a slight lead in the generic ballot that could grow by Election Day.

Let’s take a brief look at some of the key districts in each category.

Thirty-three of the 53 competitive suburban races are in districts classified as Suburban-Exurban. Overall, 11 of these seats are either toss-ups or favor the GOP to some extent. At the forefront of that group is Iowa’s 3rd District, a slightly right-leaning seat that includes Des Moines, which is the most likely tipping-point district in our forecast. Democratic Rep. Cindy Axne is defending this seat, but she appears to be a slight underdog. On the East Coast, three other light-red seats held by Democrats are also under threat. Reps. Elaine Luria and Susan Wild each have about a 50-50 chance of retaining Virginia’s 2nd District and Pennsylvania’s 7th District, respectively, while Rep. Tom Malinowski is trailing in his reelection race in New Jersey’s 7th District.

This group also includes a couple of toss-up races along the U.S.-Mexico border in South Texas, where Republicans hope to build on the gains they made in the region in 2020. In Texas’s 34th District, the incumbent-versus-incumbent contest between Democratic Rep. Vicente Gonzalez and Republican Rep. Mayra Flores appears up in the air despite the district’s fairly strong (on paper at least) Democratic lean. There’s also a toss-up contest next door in the purple 15th District, although the Republican trend there might make this seat one of the GOP’s better pickup opportunities.

Democrats do hold at least a small edge in 22 of these Suburban-Exurban seats, yet while almost all of these are being defended by Democratic incumbents, there are some juicy targets for Republicans. This group includes some light-blue seats in the northeast, like New York’s 17th District, where Democratic Rep. Sean Patrick Maloney is at risk of being the first chair of the Democratic Congressional Campaign Committee to lose reelection since 1980. But it also includes a couple red-leaning Rust Belt seats, such as Pennsylvania’s 8th District, where Rep. Matt Cartwright is trying to defy gravity as northeast Pennsylvania has shifted more Republican.

There are also 20 competitive races happening in the Dense Suburban category, including three toss-ups. Among that trio, Republicans are looking to flip two notable open seats: the bluest seat on their radar, Rhode Island’s 2nd District, and swingy suburban Pittsburgh turf in Pennsylvania’s 17th District. But in the other toss-up race, Michigan’s 3rd District, Republicans may have made it harder on themselves by ousting GOP Rep. Peter Meijer in the primary.

Ten of those competitive seats currently advantage the GOP, including California’s blue-leaning but Republican-held 27th District, which major outside Democratic groups recently decided to abandon by cutting their ad spending. And as the GOP’s chances have improved in the House, two purple seats in Ohio where Republicans are favored are now the second- and seventh-most likely tipping-point seats in our forecast: In the Cincinnati-based 1st District, Republican Rep. Steve Chabot is likely to win, while Republicans look to have a similar edge in the open, Akron-based 13th District south of Cleveland.

Lastly, Democrats are favored in seven competitive seats in the Dense Suburban category, although some could still get picked off if the GOP has a good night. The open seat in New York’s 3rd District may be most in danger, as the Long Island-based seat is only a light-blue seat. But Democrats also need to defend Kansas’s 3rd District, a red-tinged seat in Kansas City’s suburbs, where despite some recent strong polling for Democratic Rep. Sharice Davids, neither party views the race as a done deal based on outside spending.


The suburbs make up a big chunk of the districts in the House of Representatives — and the lion’s share of the districts that will be most contested on Election Day. Republicans are favored to win the House, and should they capture a majority, there’s a high likelihood that their gains in seats in the Dense Suburban and Suburban-Exurban groupings will have played a starring role in that outcome.

G
ThePollsters Who Will Control The House And Senate? Here’s What We Can Say At 4:30 a.m.