ThePollsters Meet The Midterm Candidates Who Attended The Jan. 6 Rally

Meet The Midterm Candidates Who Attended The Jan. 6 Rally​ 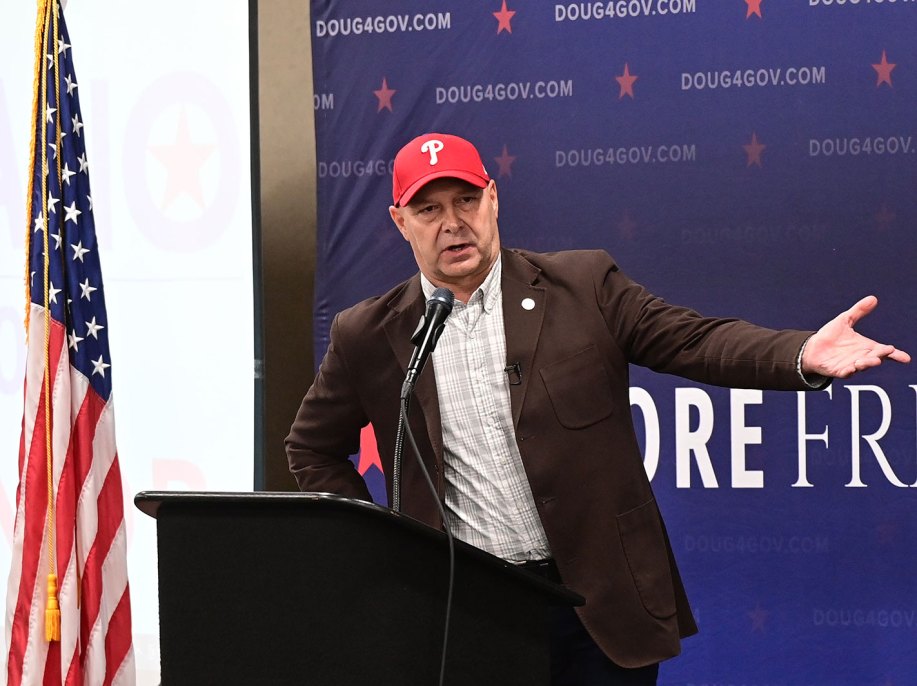 
UPDATE (Nov. 3, 2022, 10:15 a.m.): This story has been updated to include Leon Benjamin Jr. and Dan Cox, after FiveThirtyEight confirmed both candidates said they attended the Jan. 6 rally.

After then-President Donald Trump’s speech on Jan. 6, 2021, some of his supporters left his rally and smashed their way into the U.S. Capitol building, and now nearly a thousand of them are facing charges. But some in the crowd that day have gone on to try to enter the Capitol the old-fashioned way: by running for Congress.

There are at least 11 GOP candidates running for Senate, House and governor seats this fall who were in attendance at the Jan. 6 rally, according to FiveThirtyEight’s database. Their attendance indicates an extreme acceptance of Trump’s inaccurate claims of a stolen election. Of those 11, just one is running in a race that is either likely or solidly Republican, according to our Deluxe forecast. Here’s a closer look at each of those 11 candidates, including what we know about their activities that day and how likely they are to win their election, as of Monday at 12 p.m. Eastern. (All data in this article is as of this date and time.)

Benjamin, a pastor and military veteran, attended Trump’s speech on Jan. 6 and joined crowds outside of the Capitol, according to photos he posted to social media the next day. Benjamin challenged Democratic incumbent Rep. Donald McEachin for this seat in 2020 but lost by 23 percentage points. He was named the Republican candidate once again during a nominating convention in June but will likely face a similar outcome next week. Our forecast gives Benjamin a less than 1-in-100 chance of winning.

Cox, a Republican representative in the Maryland House of Delegates, attended the Jan. 6 rally with seven of his children, though he says he did not participate in the attack on the Capitol. However, during the riot, he did tweet that former Vice President Mike Pence was a traitor. Our forecast gives Cox a less than 1-in-100 chance of winning Maryland’s gubernatorial race.

In this district that covers much of the Bronx and Queens in New York City, Forte is challenging Democratic Rep. Alexandria Ocasio-Cortez. You probably don’t need to check the forecast to figure out what kind of odds Forte has. She is a right-wing influencer and Newsmax contributor who gained a following from selling Trump merchandise and spreading QAnon conspiracy theories. She has repeated Trump’s false claims that the 2020 election was stolen and livestreamed her participation in the Jan. 6 rally, telling followers to get their “asses to the Capitol.” Forte later said she didn’t regret attending Jan. 6 even after the violence that broke out, telling NY1, “I went there to shine light on the election. I did nothing. I didn’t participate in anything that went on that day, from what I see on videos or anything that they want to call it.” Forte has a less than 1-in-100 chance of winning, according to our forecast.

Joy attended the Jan. 6 rally outside of the Capitol and posted photos on social media on the day, but she said she was “football fields” away from the violent attack. She condemned the violence and said those who broke into the Capitol were “extremists.” The race for this district based around Albany is a rerun: Joy challenged incumbent Democratic Rep. Paul Tonko in 2020 and lost by 22 points, a result she may face yet again: Our forecast gives her a 2-in-100 chance of winning.

Majewski is an Air Force veteran who once made headlines for painting almost his entire front lawn into a Trump sign. Majewski attended the Jan. 6 march in D.C. and claimed to have funded travel for other attendees, though he says he “committed no crimes” and “broke no police barriers.” He’s hoping to unseat Democratic Rep. Marcy Kaptur, the House’s longest-serving woman. And there’s a chance he might. During redistricting, the Republican-controlled Ohio Redistricting Commission redrew Kaptur’s district, transforming it from a Democratic stronghold into a slightly Republican-leaning district. That said, Majewski has lost some momentum after the Associated Press reported he had misrepresented parts of his military service record, prompting the National Republican Congressional Committee to kill a nearly $1 million ad buy it had planned for the race. FiveThirtyEight’s forecast gives Majewski a 23-in-100 chance of winning the race.

Mastriano, the Republican candidate for governor in Pennsylvania, was actively involved in the “Stop the Steal” movement — protests pushing the false belief that the 2020 election was stolen. He hosted a policy meeting with Trump lawyer Rudy Giuliani in November 2020 to discuss voter-fraud conspiracy theories, and he helped fund travel for participants to attend the Jan. 6 protest in D.C. So it’s not surprising that he joined fellow election deniers in the rally that day, though he says he did not cross any police barriers or enter the building. The House Committee investigating the Jan. 6 attack subpoenaed Mastriano, who then refused to testify and sued the committee. In the race for Pennsylvania governor, Mastriano has been struggling to keep up with the Democratic nominee, Pennsylvania Attorney General Josh Shapiro. Mastriano has a 5-in-100 chance of becoming the new governor of the Keystone State, according to our forecast.

The fact that Perkins attended the Jan. 6 rally is probably not shocking if you’re familiar with the perennial candidate. Perkins, who was at the Capitol on Jan. 6 but says she did not enter the building, unsuccessfully ran for Congress in 2014, 2016, 2018 and 2020. After winning the Republican Senate primary in 2020, she thanked followers of QAnon — the false conspiracy theory that there is a secret cabal of Satan-worshiping pedophiles made up of Democratic elites and Hollywood celebrities. Less than a week after losing that race to incumbent Democratic Sen. Jeff Merkley, she announced at a “Stop the Steal” rally her intent to run for U.S. Senate again, this time challenging longtime Democratic Sen. Ron Wyden. Perkins is likely in for yet another disappointment: Our forecast gives her a less than 1-in-100 shot of winning.

Santos, a Wall Street investor, is the Republican nominee for an open seat representing this district, which spans a northwest part of Long Island. Santos has said he was “at the Ellipse on Jan. 6” and called the crowd (some of whom went on to break into the Capitol building) “amazing,” but he has more recently called the riot “a dark day in America” and refused to provide details about where he was during the attack. Our forecast gives Santos a 26-in-100 chance of winning against his Democratic opponent, former congressional aide Robert Zimmerman.

Sandy Smith, who tweeted out a video of herself at the Jan. 6 rally, is running for election in North Carolina’s blue-leaning 1st District.
ALLISON JOYCE / GETTY IMAGES

A business executive and entrepreneur, Smith previously ran to represent this district in 2020, challenging longtime Democratic Rep. G.K. Butterfield. She lost by 9 percentage points then, but she is back this year hoping to replace the retiring Butterfield. Smith attended the Jan. 6 rally, tweeting a video amidst the crowd and saying she believed Trump won the election (he did not). But even without facing an incumbent, Smith has an uphill battle in this blue-leaning district. Our forecast gives her just a 4-in-100 chance of winning against the Democratic candidate, state Sen. Don Davis.

Van Orden is a retired Navy SEAL who ran for Congress in this expansive district in 2020, losing by just 3 points to incumbent Democratic Rep. Ron Kind. On Jan. 6, Van Orden was in D.C. “for meetings and to stand for the integrity of our electoral system as a citizen and at the behest of my neighbors here in Western Wisconsin,” according to an op-ed he wrote after the riot. Van Orden said he stood at the perimeter and watched the attack begin. He wrote that he left when “it became clear that a protest had become a mob,” and said he was “disturbed” by the ensuing attack. Now, with Kind retiring, Van Orden is taking another run at the seat and is leading the Democratic candidate, state Sen. Brad Pfaff. Our forecast gives Van Orden a 85-in-100 chance of winning.

On Jan. 6, Zink and his son participated in the protest outside of the Capitol, though the elder Zink says he only stood on the steps outside of the Capitol and did not go inside. His son was later arrested and charged with trespassing, assault and damaging property (he has pleaded not guilty). Zink condemned the violence of the riot but also spoke out in defense of individuals arrested for alleged involvement in the attack. Zink is challenging incumbent Democratic Rep. Ruben Gallego and has an uphill battle in this deep-blue district, which has a FiveThirtyEight partisan lean of D+44. Our forecast gives Zink a less than 1-in-100 chance of unseating Gallego.


Of course, this is only a sample — there are even more candidates running for state and local offices who also attended the Jan. 6 rally, including some who have faced charges for their alleged participation in the riots that followed. There’s also Max Miller, the Republican candidate for Ohio’s 7th District, who helped plan the rally as a member of Trump’s White House, though it’s unclear if he was physically there that day. (Our forecast gives Miller a 98-in-100 chance of winning.)

Stay tuned for our coverage of the races featuring Jan. 6 attendees — in addition to all candidates who have denied the legitimacy of the 2020 election — in the days and weeks ahead.