ThePollsters Final Forecast: The Senate And Most Of Its Key Races Are Toss-Ups

Final Forecast: The Senate And Most Of Its Key Races Are Toss-Ups​ 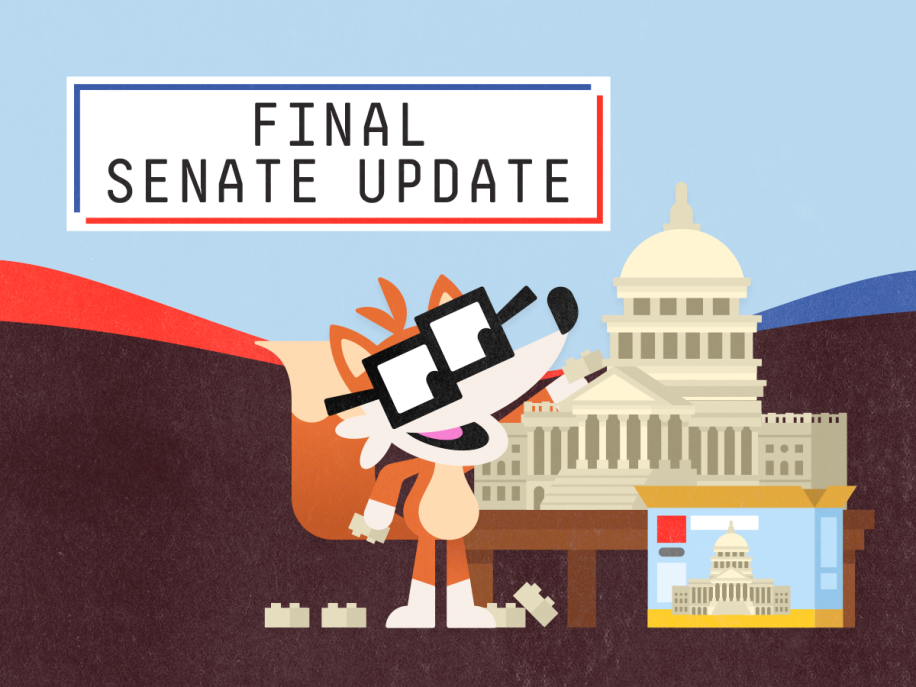 
Just about no part of the 2022 midterms is more uncertain than the race for control of the U.S. Senate. The chamber is split 50-50 between Democrats and Republicans,1 but Democrats hold a precarious majority via the tie-breaking vote of Vice President Kamala Harris. As a result, a one-seat gain by Republicans would be enough to give them control, whereas Democrats need to avoid any net losses to retain their advantage.

But the fate of the Senate looks to be on a knife’s edge. Republicans have a 59-in-100 chance of taking control of the chamber, according to FiveThirtyEight’s Deluxe forecast, which is now frozen. That isn’t much better than the probability of calling a coin-flip correctly, although the GOP may have the slightest of edges. Considering the midterm environment and the seats that are up this cycle, it’s perhaps unsurprising that Republicans have a slightly better chance than Democrats of capturing the Senate. But the GOP’s fortunes have also improved markedly in the final weeks, as Democrats had about a 7-in-10 shot of controlling the Senate in late September. 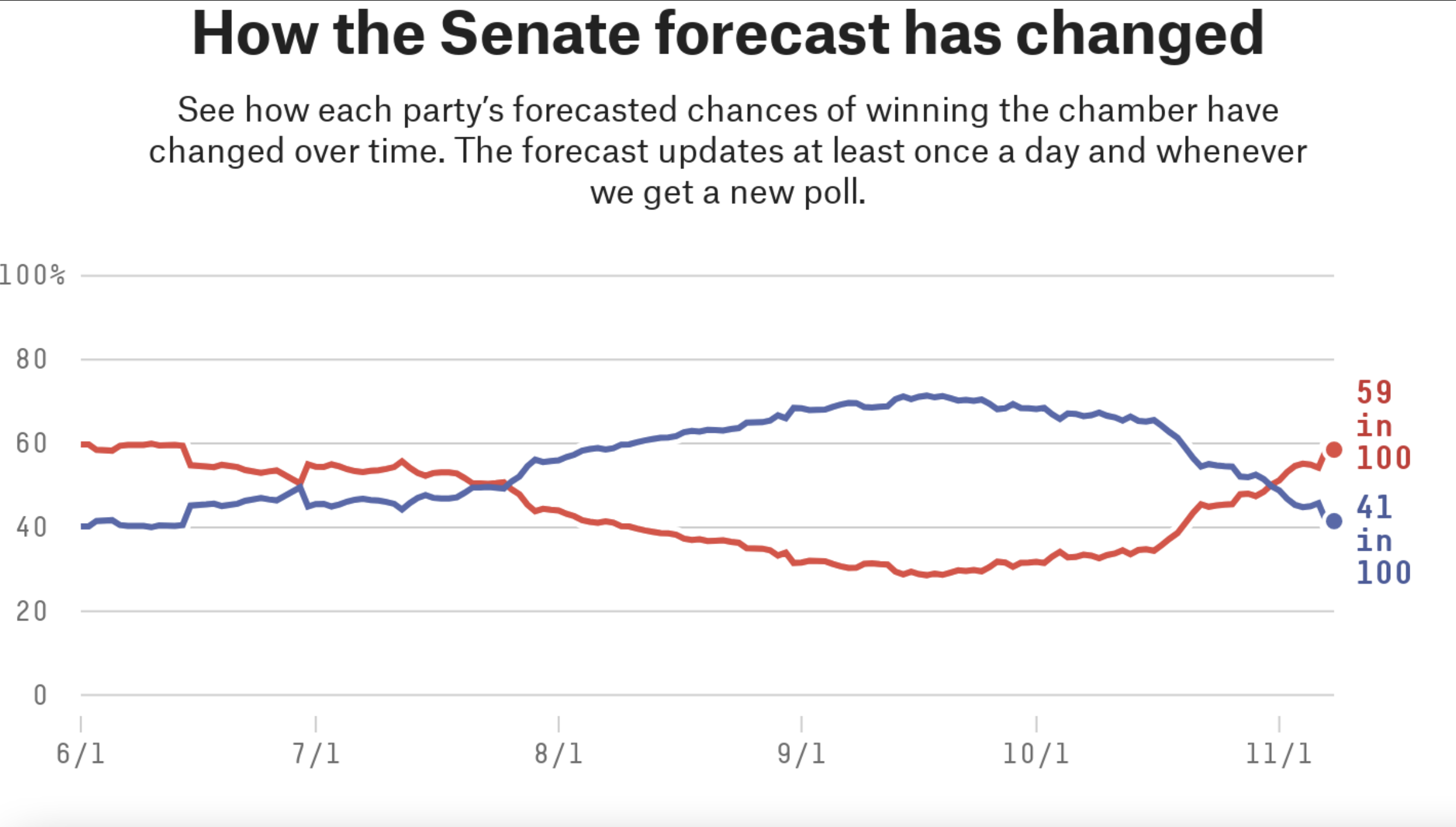 Still, if one party does have an edge, it’s the GOP. Our forecast, which has trended toward Republicans in the final few weeks of the campaign, gives them an 80 percent chance of holding between 48 and 54 seats after this election. Our forecast predicts that, on average, Republicans will wind up with 50.9 seats — essentially 51, which would be just enough for outright control of the chamber.

And if we look individually at the 35 Senate contests on the ballot,2 we can also see how Republicans are somewhat better positioned than Democrats. That’s because the GOP needs fewer things to go right on Election Day, whereas Democrats have less room for error.

This GOP advantage is most obvious in the Senate’s five most competitive seats, four of which are being defended by Democrats. To hold the Senate, Democrats at a minimum must retain all four seats they currently control, or retain three of the four and pick up the one seat in this group that Republicans are defending. Of the four seats Democrats are defending, one leans toward the GOP, one is a toss-up and two narrowly lean Democratic, while the GOP-held seat is also a toss-up.

Democrats are defending four of the five most competitive seats​

The five most competitive 2022 Senate races, by their likelihood of deciding Senate control according to the FiveThirtyEight final Deluxe forecast


And for the most part, these are among the races most likely to decide control of the Senate — that is, be the “tipping-point” contest. In light of this, the most important matchup may be in Georgia. Using the interactive version of the forecast, giving Georgia to either party raises its chances of winning the Senate to about 3 in 4, without knowing outcomes anywhere else. The good news for the GOP is that it may have the upper hand here, as Republican Herschel Walker has a 63-in-100 chance of defeating Democratic Sen. Raphael Warnock. Walker’s chances have improved despite allegations that he encouraged and/or paid for multiple women to have abortions while campaigning on a mostly anti-abortion platform. But Walker, like most other Republican candidates, may be benefiting from the more favorable Republican national environment. Notably, this race is so close that there’s about a 1-in-5 chance it will go to a Dec. 6 runoff, should neither candidate win an outright majority (there’s also a Libertarian on the ballot).

Republicans’ other top pick-up opportunity is in Nevada, but that race could be a squeaker: Republican Adam Laxalt has a 51-in-100 chance of defeating Democratic Sen. Catherine Cortez Masto, according to our forecast, which suggests neither candidate really has an advantage. Still, Laxalt has about a 1-point lead in our polling average, although neither candidate has had an advantage much beyond that margin since late September. Cortez Masto will hope that the vaunted electoral organization built by her predecessor, the late Democratic Sen. Harry Reid, can turn out Democratic voters, but Laxalt may come out on top thanks to frustration over inflation and the economy.

The other toss-up race is in Pennsylvania, but Republicans here are on the defensive following the retirement of Republican Sen. Pat Toomey. This seat is of critical importance, too, as our forecast interactive shows that Oz winning would give Republicans better than a 4-in-5 shot of capturing the Senate, while Democrats’ chances would improve to around 7 in 10 with a win here. Appropriately, the race is just about too close to call: Republican Mehmet Oz, a physician and TV personality, has a 57-in-100 chance of defeating Democratic Lt. Gov. John Fetterman. This race has been trending toward Oz, though, as Fetterman’s roughly 3-point lead two weeks ago has narrowed to practically a tie in our polling average. Fetterman suffered a stroke in the spring, and coverage of its effects on his health and his ability to serve have been a major focus of the race, but Oz has had to make up ground in this campaign because voters tend to view him more unfavorably than Fetterman.

The two other highly competitive seats narrowly favor Democrats. In Arizona, our forecast gives Democratic Sen. Mark Kelly a 66-in-100 chance of defeating Republican Blake Masters. But while Kelly may narrowly best Masters thanks to his huge spending edge, the incumbent may also thank his personal appeal: Likely Arizona voters told Siena College/The New York Times in late October that they preferred GOP control to Democratic control of the Senate, but also that they preferred Kelly over Masters. In New Hampshire, our forecast gives Democratic Sen. Maggie Hassan a 72-in-100 chance of beating Republican Don Bolduc, a retired Army general whom popular New Hampshire Gov. Chris Sununu (a fellow Republican) labeled a “conspiracy-theory type” candidate during the GOP primary (Sununu has since backed Bolduc, however).

Five other races look more likely to go for one party or the other — three in seats held by Republicans and two in seats held by Democrats — but they could also be in play depending on how the night goes for each party.

Republicans are favored but not certain to win three other races​

The next five 2022 Senate races that don’t solidly lean toward either party, by their likelihood of deciding Senate control according to the FiveThirtyEight final Deluxe forecast


In Wisconsin, one of the country’s leading swing states, Republican Sen. Ron Johnson is favored to defeat Democratic Lt. Gov. Mandela Barnes. Historically, incumbents from the party not in the White House almost never lose in midterms, so Johnson has likely benefited from the political environment. Republicans are defending two open seats in North Carolina and Ohio, but they also look like good bets to win each race. In red-leaning North Carolina, GOP Rep. Ted Budd looks to have the upper hand over Democrat Cheri Beasley, a former chief justice of the North Carolina Supreme Court. And while Ohio has looked competitive for much of this cycle, Republican J.D. Vance looks likely to defeat Democratic Rep. Tim Ryan, as Vance has consolidated support among Republicans in a state that is redder than North Carolina and Wisconsin.

Despite their states’ blue leans, Democratic incumbents in Colorado and Washington could also face danger if things go well for the GOP. In Washington, five-term Democratic Sen. Patty Murray is favored over Republican Tiffany Smiley, who has almost kept pace with Murray in fundraising. In Colorado, Democratic Sen. Michael Bennet looks likely to defeat Republican Joe O’Dea. But Republicans have hoped O’Dea could surprise here thanks to his business background and moderate profile based on his opposition to the Supreme Court’s decision to overturn Roe v. Wade.

Although Republicans should win both contests, two other races are of interest thanks to the unusual nature of their elections: Alaska and Utah.

The two unusual Senate matchups in 2022​

The major candidates and win probabilities in the 2022 Senate races in Alaska and Utah, according to the FiveThirtyEight final Deluxe forecast


Alaska uses a ranked-choice voting system, where if no candidate wins a majority of first-choice votes, lower-performing candidates’ voters are reallocated to their secondary preferences until one candidate has a majority.


Under Alaska’s new electoral system, which combines the nation’s first top-four primary with ranked choice voting in the general election, the Senate race has come down to two very different Republicans: Sen. Lisa Murkowski and Kelly Tshibaka, a former commissioner of Alaska’s Department of Administration. Thanks to her moderate reputation, Murkowski is positioned to win many independent and most Democratic votes, even though Tshibaka, who has former President Donald Trump’s endorsement, will likely win most Republican votes. In red-leaning Alaska, that has made for a very tight race, with each candidate having about a 1-in-2 shot of victory.

Meanwhile, Utah will feature a contest between Republican Sen. Mike Lee and independent Evan McMullin, who ran for president in 2016 and won 21 percent in Utah as a conservative alternative to Trump. Lee is heavily favored to win, but McMullin did receive the state Democratic Party’s endorsement as part of trying to build a coalition of Trump-skeptical Republicans, independents and Democrats.

All in all, close races in a few key states will likely decide which party has a majority. If Republicans make gains, that would largely be in line with midterm history: Dating back to World War II, the president’s party has lost seats in 13 of 19 midterms. But Democrats will hope they can add 2022 to the list of midterms in which the president’s party gained seats or at least avoided losses. And the stakes couldn’t be higher: Just one seat could be the difference between Republicans having full control of Congress and Democrats maintaining a foothold on Capitol Hill.

N
ThePollsters Final Election Update: The Forecast Is More Or Less Back Where It Started

Nov 8, 2022
Nate Silver
N
N
ThePollsters Are The Democrats Screwed In The Senate After 2024?

Nov 9, 2022
Geoffrey Skelley
G
A
ThePollsters Final Forecast: How Arizona, Oregon And Other States Will Vote For Governor

Nov 8, 2022
Alex Samuels
A
M
ThePollsters The Number That Will Shape Republican Politics In 2023