ThePollsters Final Forecast: Republicans Are Favored To Win The House

Final Forecast: Republicans Are Favored To Win The House​


Election Day is finally upon us, and we’re “right back where we started from,” to borrow a phrase from Maxine Nightingale. FiveThirtyEight’s Deluxe forecast for the U.S. House, which is now final and no longer updating, estimates that Republicans have an 84-in-100 chance of taking control of the chamber. That’s roughly the same chance Republicans had when we launched our midterm forecast on June 30. 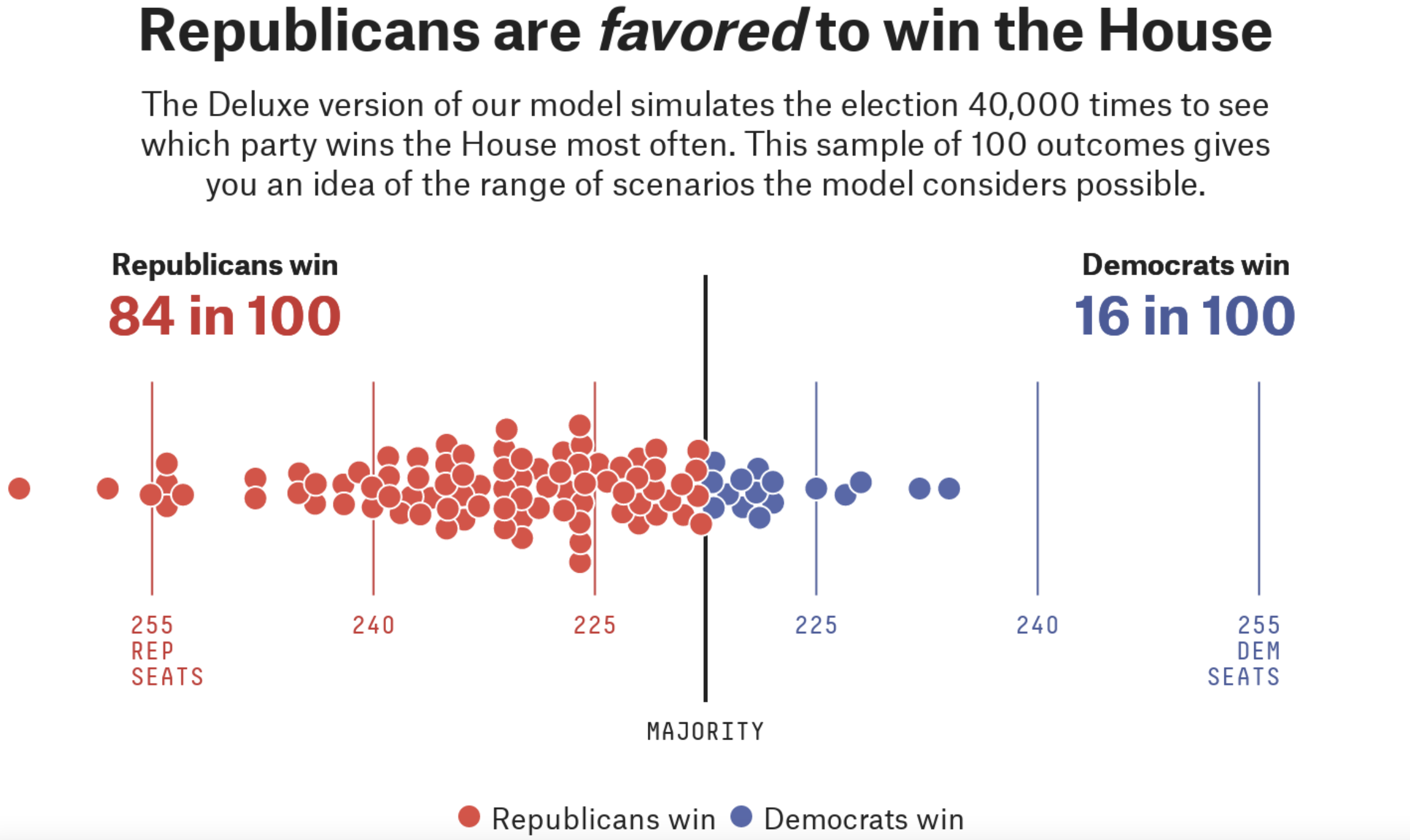 The 87-in-100 chance that Republicans had back in June was consistent with not only the polls but also historical precedent. The president’s party has lost an average of 26 House seats in midterm elections since the end of World War II.

But in the wake of the Supreme Court’s decision to overturn Roe v. Wade, the national mood seemed to shift in the Democrats’ favor. Democrats retook the lead in the generic congressional ballot polls (which ask Americans to pick the party they plan to support for Congress without asking about specific candidates). And their chances of keeping the House in our forecast rose as high as 32-in-100 — enough to make Republicans sweat. 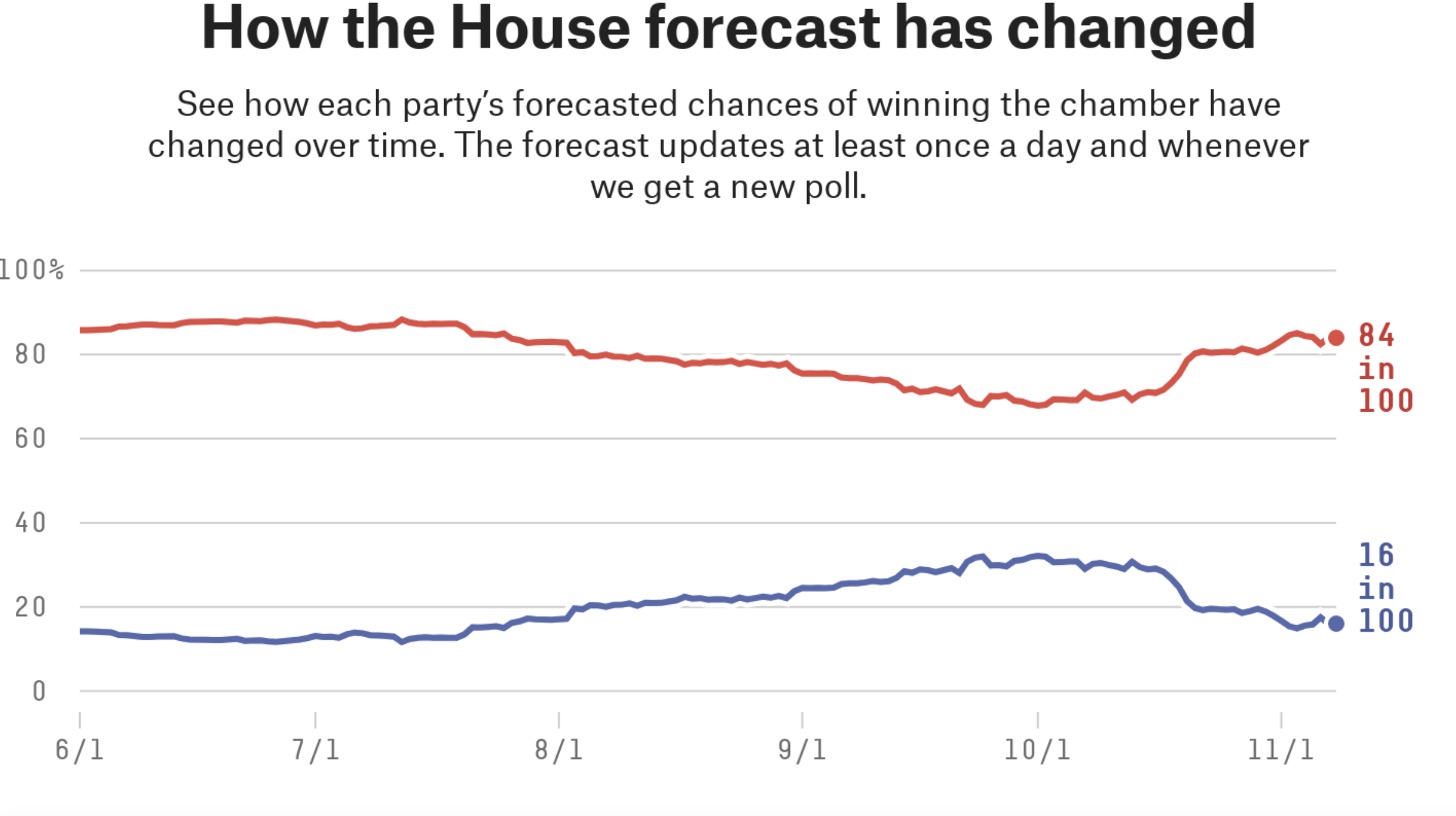 Then in October, the national political mood turned back against the president’s party, as it usually does in the final month of a midterm campaign. As a result, our final average of generic congressional ballot polls shows Republicans getting 46.9 percent support nationally and Democrats getting 45.7 percent. Still, that is not as big of a lead as the opposition party enjoyed in the 2010 and 2018 midterms. Democrats’ summer surge may have saved them from their doomsday scenario — a so-called “red wave” election.

Our forecast also predicts that, on average, Republicans will win 230 seats in the next House, and Democrats will win 205. That would be a 17-seat gain for Republicans, which would be below average for a midterm election. However, those seat projections come with very wide confidence intervals, which means a wide range of scenarios is possible. For example, our forecast says there’s an 80 percent chance that Republicans will gain between one and 33 House seats. 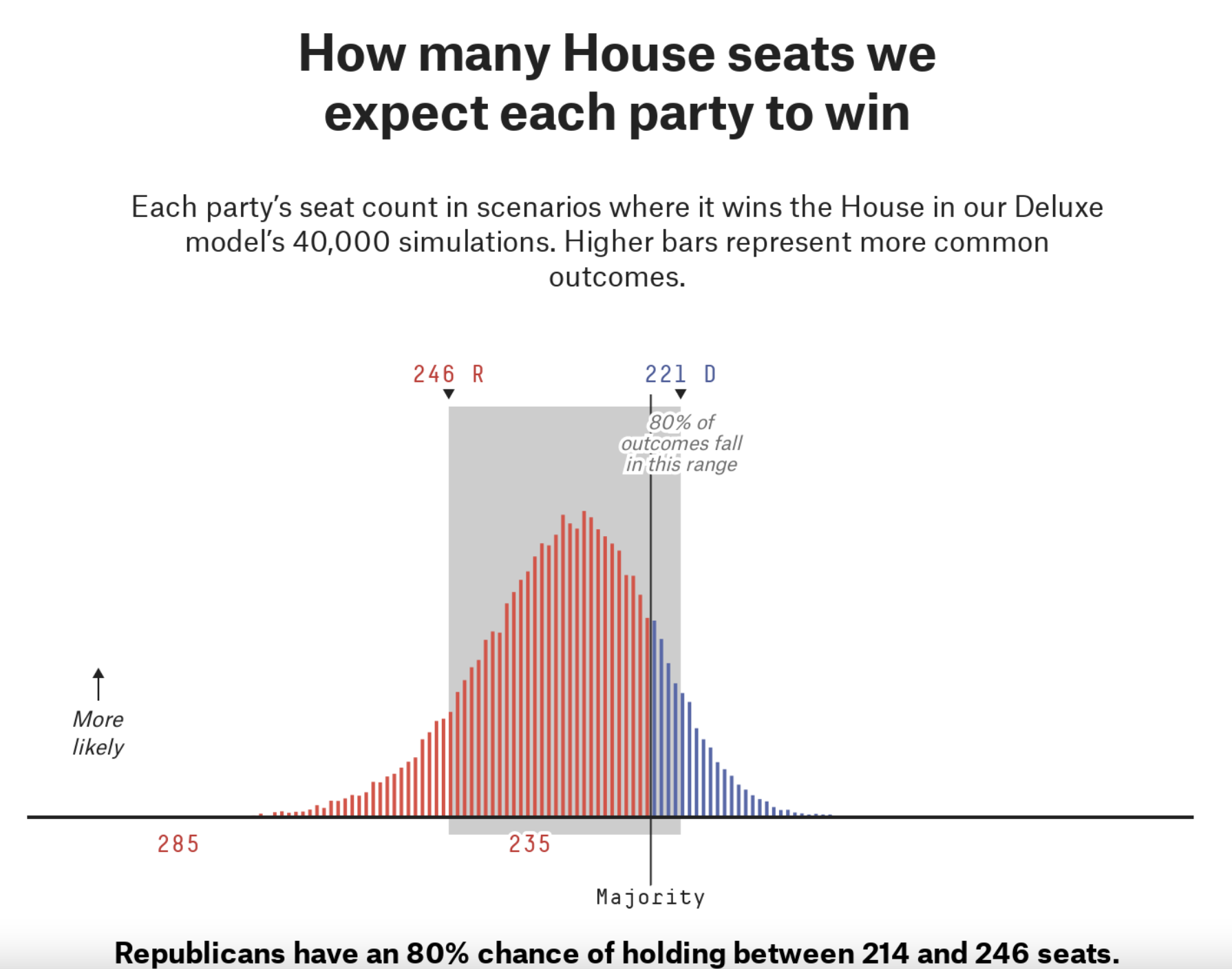 Republicans’ odds of flipping the chamber are high because they don’t need to flip a ton of seats to take control. Democrats currently have nine more House seats than Republicans,1 which means the GOP needs a net gain of five seats. And they have plenty of opportunities to pick up seats. Here is a list of every House seat that Republicans have a greater than 25 percent chance to pick up,2 according to the FiveThirtyEight forecast.

Republicans have many paths to a House majority​

House districts that Republicans have at least a 25 percent chance of picking up in 2022, according to the FiveThirtyEight final Deluxe forecast

Includes both Democratic-held seats and new seats created by redistricting that don’t have an incumbent party.


Republicans have a greater than 90-in-100 chance of capturing 10 of these seats, primarily because congressional redistricting made these seats easy targets for the party. For example, Republican mapmakers redrew the Georgia 6th and Tennessee 5th districts to be 25 and 32 percentage points redder, respectively. And Florida’s new congressional map converted three Democratic-held districts — the 5th,3 7th and 13th — into Republican strongholds. Population growth also led to the creation of four new districts (the Colorado 8th, Florida 15th, Montana 1st and Texas 38th) that will probably go red.

There are also a lot of open seats on this list where Democratic incumbents aren’t running for reelection. The electoral advantage of incumbency isn’t what it once was, but it can still matter in a close race. So more Democrats retiring from the House than Republicans is another boon to the GOP. For example, Democrats are in danger of losing the Wisconsin 3rd without moderate Rep. Ron Kind, and the Rhode Island 2nd likely wouldn’t even be competitive if Rep. Jim Langevin were running again.

Of course, several Democratic incumbents are vulnerable too, especially those in districts carried by former President Donald Trump in the 2020 election. Reps. Tom O’Halleran, Cindy Axne and Mary Peltola may struggle to find enough crossover voters to survive. Reps. Matt Cartwright and Jared Golden are in a better position but are not out of the woods.

House districts that Democrats have at least a 25 percent chance of picking up in 2022, according to the FiveThirtyEight final Deluxe forecast


Includes both Republican-held seats and new seats created by redistricting that don’t have an incumbent party.

*Two incumbents are running in the Texas 34th: Republican Mayra Flores and Democrat Vicente Gonzalez. However, because Gonzalez currently represents the next-door 15th District, Flores is listed as the incumbent.


Redistricting also helped Democrats a bit in the House. The North Carolina 14th, Oregon 6th and Texas 35th are new districts created by reapportionment. And Democratic mapmakers reconfigured the Republican-held Illinois 13th to elect a Democrat. And then, there are a couple of Republican incumbents whose seats are now blue enough that they should watch their back: For instance, President Biden won California’s new 22nd and 27th by double digits. Overall, though, Democrats have fewer opportunities to add members than Republicans do, which essentially tells the story of this election.


What’s that? Do you still insist on staying up late on Tuesday to follow the results, just in case something unexpected happens? In that case, I have two recommendations. The first is to pay particular attention to the 25 House districts below. According to our forecast, they are the 25 most likely “tipping-point” seats, or the seats most likely to decide control of the chamber. As these seats go, so goes the House.

The districts that could decide control of the next House​

The 25 most likely “tipping-point” districts in the 2022 House election, according to the FiveThirtyEight final Deluxe forecast

The Colorado 8th is a new district created by redistricting and has no incumbent party.


The second recommendation: Join us for our Election Day/election night/election week live blog starting at 10 a.m. Eastern. We’ll cover races for House, Senate, governor, secretary of state, attorney general, state legislature, ballot measure — you name it. We often end FiveThirtyEight articles with some variation of “let’s wait and see”; this time, we won’t have to wait too long.

N
ThePollsters Republicans Are Favored In Our Final Midterm Forecasts

Nov 7, 2022
Nate Silver and Galen Druke
N
G
ThePollsters Final Forecast: The Senate And Most Of Its Key Races Are Toss-Ups

Nov 8, 2022
Geoffrey Skelley
G
N
ThePollsters Final Election Update: The Forecast Is More Or Less Back Where It Started

Nov 8, 2022
Nate Silver
N
N
ThePollsters Republicans Are Just A Normal Polling Error Away From A Landslide — Or Wiping Out