ThePollsters Final Election Update: The Forecast Is More Or Less Back Where It Started

Final Election Update: The Forecast Is More Or Less Back Where It Started​

Republicans are favored in the House. The Senate is more competitive.​ 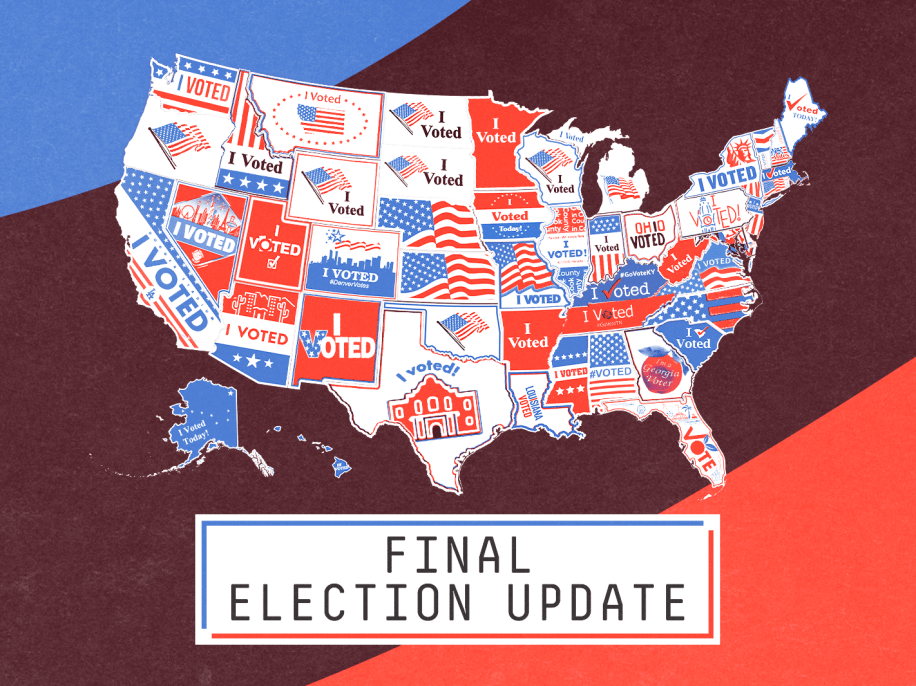 Before I dig deeper into this ostensible stability, a few words about the probabilistic nature of our forecast.

First, let’s talk a bit more about that final GOP Senate number, 59 percent. It’s in an annoying zone as far as I’m concerned. If I met you on the street, I wouldn’t know how to describe the race. It’s on the brink between a toss-up and one that we say leans toward Republicans. And to make matters more confusing, that 59 percent figure comes from our Deluxe forecast, which includes the input of human expert forecasters like the Cook Political Report. The Lite forecast (essentially a “polls only” version) and the Classic forecast (polls plus other objective indicators) have Republicans as just 50 and 51 percent “favorites,” respectively.

I don’t want to blow off that 59 percent number. Deluxe is supposed to be the most accurate version of our model. To be blunt, 59 percent is enough of an edge that if you offered to let me bet on Republicans at even money, I’d take it. (If I bet on politics, that is. Which I don’t.) Still, Democrats holding the Senate, or the race coming down to a runoff in Georgia, would not be surprising in the least.

In the House, meanwhile, you shouldn’t round the Republicans’ 84 percent chance up to 100 or the Democrats’ 16 percent chance down to zero. Two years ago, Republicans had just a 3 percent chance of winning the House in our final forecast and yet came within five seats of doing so. The balance of the evidence suggests a national political environment that favors Republicans by only 2 to 3 percentage points. And the polling itself, if anything, has been a little tighter than that. (Democrats have a 25 percent chance to keep the House in the polls-only Lite version of our forecast. After the redistricting process, Republicans have less of an advantage from gerrymandering and district boundaries than they did previously, so a roughly tied national environment would lead to a highly competitive race for the House — see yesterday’s post for much more detail on this.)

At the same time, the upside case for Republicans has perhaps been understated. Our model puts the 80th percentile range of outcomes in the House at between a one-seat and a 33-seat GOP gain; and remember, 20 percent of the time, the number will fall outside that range. Just as it isn’t that hard for the race in the House to become rather competitive, it also won’t take much to turn it into a Republican landslide.

Similarly, just because we’ll start the night with roughly 50-50 odds in the Senate does not necessarily mean we’ll finish the night with the balance of power determined by just one or two seats. Fairly often, all the competitive races break the same way in races for Congress. There’s almost a 25 percent chance that Republicans wind up with 53 or more seats, according to our Deluxe forecast (and a 7 percent chance that Democrats do so).


As I mentioned earlier, the topline probabilities in our House and Senate forecasts are very similar to what they were in June. But surely some individual races changed a lot, especially in the Senate? Nope, not that either. Take a look at Republican chances of winning in the 12 most competitive Senate races.

Senate races look the pretty much the same as in June​


In every state, the numbers are nearly identical. Of course, that doesn’t mean the race was steady the whole time. Democrats had much clearer polling leads in Pennsylvania and Arizona during the late summer. They were even ahead in the polls in Wisconsin, and tied in Ohio and North Carolina — all states where they now trail.

One plausible explanation is that Democrats initially benefited from a focus of attention on the Supreme Court’s decision that overturned Roe v. Wade, but then fell back to earth as the news cycle began to emphasize other topics such as immigration, inflation and crime.3 There is probably some truth to that, but I’d be careful about assuming the story is that simple. For one thing, the president’s party typically does worse in the polls the longer you go in the election cycle. This time, though, Democrats are actually doing slightly better on the generic ballot on the day of the election — trailing by 1.2 percentage points — than they were on June 23, the day before the Dobbs decision, when they trailed by 2.3 percentage points. That’s unusual historically and does suggest some lasting impact from Dobbs.

Also, while Democrats might have abortion working for them, they have a lot working against them, including inflation (polling shifts have been strongly correlated with changes in gas prices) an unpopular president, record numbers of migrants at the Mexican border and very long history of poor performance for the president’s party at the midterms. If the polls are exactly right — they won’t be, but let’s play along — and Republicans win only 15 House seats or so while the Senate comes down to another runoff in Georgia — that would be a pretty good night for Democrats relative to historic norms.

Of course, that is one reason to expect the polls might not be right and could be biased against Republicans again. And yet, the Democrats’ summer boomlet was real, realized not just in the polls but also in a series of ballot initiatives and special-election outcomes. If you don’t trust the polls, should you default to the fundamentals or to actual election results, like the upset wins Democrats had in races from Alaska to New York? You can make a decent case either way.

The fact is that American voters are under a lot of conflicting pressures. They care about the Supreme Court, the Jan. 6 attack on the U.S. Capitol and Republican extremism, but they also care about inflation, crime and immigration, issues that have historically had a large influence on elections. Meanwhile, partisanship is high and tends to swamp all other factors; incumbency and candidate quality matter less than they used to. In any event, those various forces of political gravity have put us roughly back in the same place as we were in June.


One final word: While we’ve tried to prepare you for the three basic scenarios — polls roughly correct, polls biased against Republicans, polls biased against Democrats — those aren’t the only uncertainties in play. Although polling and forecast errors are correlated from race to race in midterms, they aren’t correlated as much as they are in presidential races.

In one of the practice runs I did for the ABC News TV set — please tune in tonight! — the producers tried to throw us for a loop by having Don Bolduc, the Republican candidate for Senate in New Hampshire, win his race but Sen. Raphael Warnock, the Democratic incumbent in Georgia, wins his race without a runoff. Sounds impossible, right? Well, it’s not that crazy: such an outcome occurs about 5 percent of the time in our simulations. And while there’s been a lot of focus on Georgia, Pennsylvania and Nevada, some state other than those three is the tipping point state in our simulations 56 percent of the time.

If the election is close, it could take a long time to obtain certainty about who controls Congress, whether because of the Georgia runoff, the long time it takes to count ballots in some states, legal challenges, or candidates refusing to accept the results. A lot of coverage has focused on these concerns as they relate to 2024, but frankly I’m worried about what a razor-thin result would mean this year, too. We’ve appreciated your following our election coverage this year, and we’ll do the best we can to cover a potentially long and messy aftermath.

G
ThePollsters Final Forecast: The Senate And Most Of Its Key Races Are Toss-Ups

Nov 8, 2022
Geoffrey Skelley
G
A
ThePollsters Final Forecast: How Arizona, Oregon And Other States Will Vote For Governor