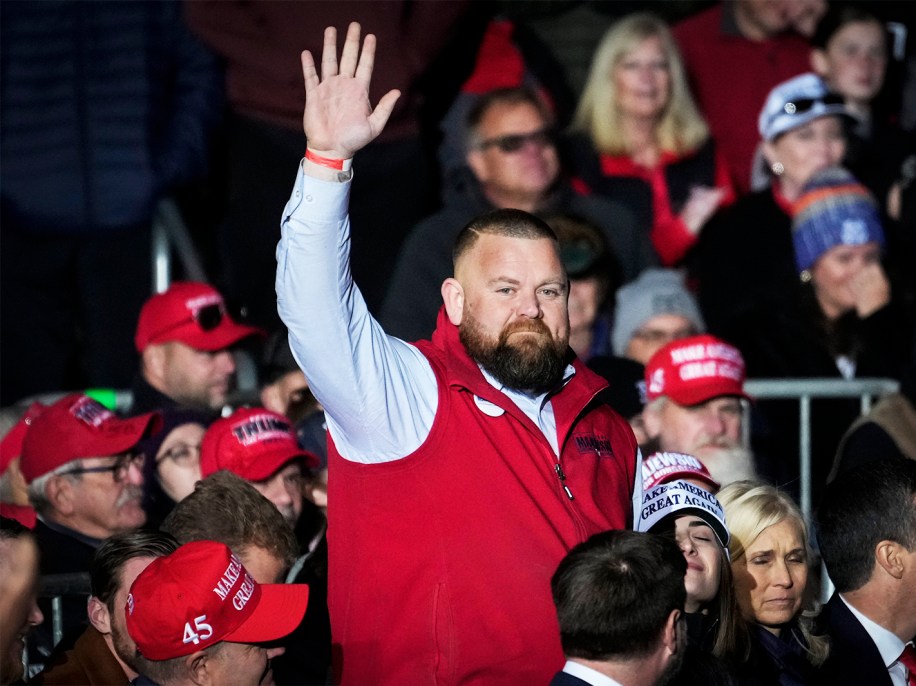 J.R. Majewski was one of the most vocal deniers of the 2020 election who ran in 2022 — and he lost his race for Ohio’s 9th District.
Drew Angerer / Getty Images


Doug Mastriano has been one of the most ardent supporters of former President Donald Trump’s baseless claims that the 2020 election was fraudulent. As state senator, he attempted to launch a forensic “audit” of Pennsylvania’s election results. He attended the “Save America” rally that preceded the attack on the Capitol on Jan. 6, 2021. And on Tuesday, he lost his race for Pennsylvania governor, according to ABC News projections.

As our forecast predicted, the majority of candidates who denied the legitimacy of the 2020 election are projected to win their races. But the bulk of those wins are from incumbent Republicans, in particular members of Congress who voted not to certify some of the 2020 election results. Many of the most vocal election-denying candidates who made claims of voter fraud central to their campaigns failed to break through, as did most newcomers who aligned themselves with Trump’s stolen election narrative. While many factors have influenced these results, the overall trend suggests that playing to voters who don’t trust the results of the 2020 election wasn’t a winning strategy by itself.

Of the 199 Republican candidates for the House, Senate, governor, secretary of state, and attorney general who deny the legitimacy of the 2020 election, so far 134 (67 percent) are projected to win their races, 52 are projected to lose, and 13 have yet to be called, as of Thursday, Nov. 10, at 4:30 p.m. Eastern. Of those 134, 112 are incumbent members of the House, many of whom voted not to certify the results of the 2020 election and still haven’t said the election was legitimate, but who also did not make the issue of election fraud central to their campaigns. Take Rep. Doug Lamborn, the Republican representing Colorado’s 5th District. Lamborn voted to not certify the 2020 election results but then seemingly dropped the subject entirely. Lamborn managed to fend off more vocal election-denying, hard-right challengers during the GOP primary in June, and ABC News now projects him to win reelection in the deep-red district. But it also includes some vocal election deniers, like Alabama Gov. Kay Ivey, who released a campaign ad where she claimed “the fake news, big tech, and blue state liberals stole the election from President Trump.” Ivey, who has been Alabama governor since 2017, is projected to win reelection.

Election-denying newcomers running in open seats or against Democratic incumbents had a harder time on Tuesday — in the races that have been called, the majority of these candidates have lost. Of the 80 non-incumbent Republican election deniers who ran for House, Senate, governor, secretary of state, and attorney general, just 22 are currently projected to win (28 percent), while 49 (61 percent) are projected to lose, and nine are in races that have yet to be called. Many of these losses were in races where the Democrat had an advantage but were far from guaranteed slam dunks. J.R. Majewski, the Republican candidate for Ohio’s 9th District who attended the Jan. 6 rally that preceded the attack on the Capitol, told FiveThirtyEight in an email that there were “irregularities and illegalities that occurred across multiple states” in the 2020 election. Heading into the election, our final forecast gave Majewski a 22-in-100 chance of winning, but he began the campaign with much stronger odds. Majewski is projected to lose to incumbent Democratic Rep. Marcy Kaptur.

In at least one race so far, an election denier who was favored to win is projected to lose. Bo Hines, a former college football player and the Republican candidate for North Carolina’s 13th District, said he believed the 2020 election was “stolen.” Hines was polling well heading into the election, and our final forecast gave him a 77-in-100 chance of winning, but he is now projected to lose to Democrat Wiley Nickel, a state senator. There’s also a chance that Rep. Lauren Boebert of Colorado’s 3rd District, who has said voting not to certify the 2020 election results was one of the things she was “most proud of,” might lose her reelection bid — she’s currently in a nail-biter finish with Democratic challenger, former Aspen City Councilor Adam Frisch. If Frisch wins, it would be the most dramatic upset of the election so far. Boebert had a 97-in-100 chance to win, according to our final forecast.

Perhaps most meaningfully, voters almost universally rejected election deniers who ran for secretary of state, an office that is typically a state’s top election official and responsible for administering elections, enforcing election laws and certifying results. Having a secretary of state who doesn’t accept the results of the last democratic election, with a total lack of evidence of fraud, raises questions about whether or not they would act to overturn the results of a future election — even without evidence. In seven states, the Republican candidate for secretary of state denied the legitimacy of the 2020 election, and four are projected to lose. Only one election-denying secretary of state candidate — Chuck Gray in Wyoming — is projected to win. Of the races yet to be called, it looks like the election denying candidates are likely to lose, too. In Nevada, Jim Marchant, who has said he would not have certified Nevada’s 2020 election had he been secretary of state, is currently leading by a slim margin, but the remaining ballots are expected to favor his Democratic opponent, Francisco Aguilar. In Arizona, Republican candidate for secretary of state Mark Finchem has been deeply involved with Trump’s effort to overturn the election. He attended the Jan. 6 rally, worked with Trump’s campaign lawyer Rudy Giuliani and signed a resolution with fellow state lawmakers to send illegal alternate electors to the Electoral College. He’s currently trailing Democratic candidate Adrian Fontes, former recorder for Maricopa County.

This isn’t to say that Republicans who won last night mostly accepted the results of the 2020 election: Nineteen candidates who are projected to win at least questioned the results and many more refused to take a stance. There are also many races yet to be called — including for some of the most high-profile election deniers, like Finchem, Marchant and Kari Lake, the Republican nominee for governor in Arizona who has made claims of fraud in the 2020 election central to her campaign. But for many Republicans on Tuesday, making election denialism central to their campaign wasn’t enough to carry them over the finish line. And many of the most ardent supporters failed to win, suggesting that denying the 2020 election wasn’t the campaign strength that many of these candidates may have hoped.

Dec 1, 2022
Galen Druke and Kaleigh Rogers
G
Z
ThePollsters Election Denialism Lives On, Even As Candidates Who Support It Concede