A Blue Nevada Means Democrats Will Keep Control Of The Senate​ 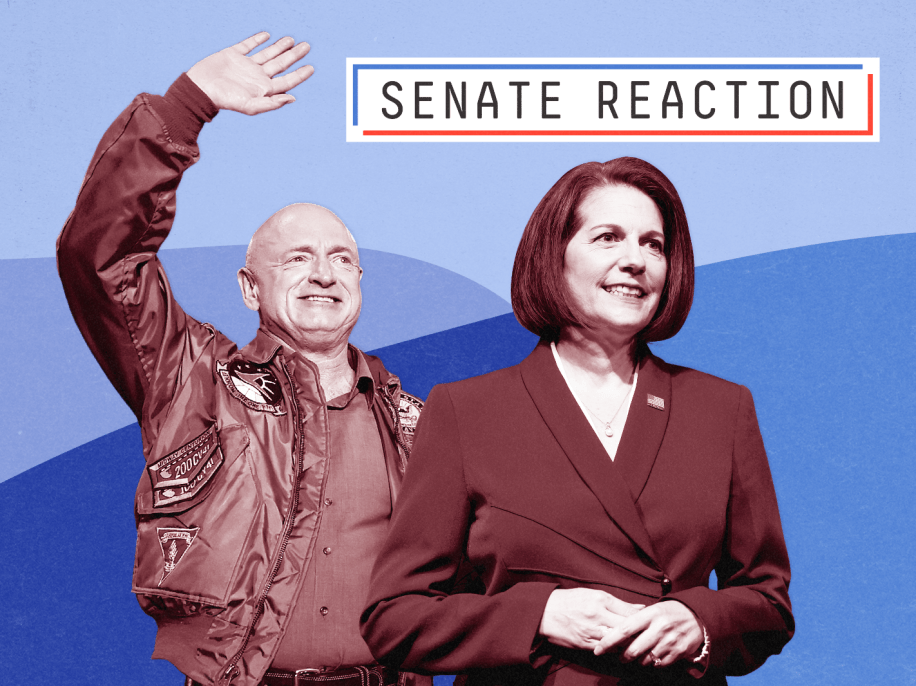 
For Democrats, the Silver State is gold: ABC News has reported that Democratic Sen. Catherine Cortez Masto is projected to win reelection in Nevada. This projection confirms that Democrats will retain at least 50 seats in the U.S. Senate and, with Vice President Kamala Harris’s tie-breaking vote, guarantees Democrats a slim majority in Congress’s upper chamber.

The Nevada news comes on the heels of a projection in Arizona’s Senate race on Friday night, when it became clear that Democratic Sen. Mark Kelly would win reelection in the Grand Canyon State. We now know the partisan makeup of the next Senate, with the lone exception of Georgia, which will go to a runoff on Dec. 6. (Alaska has yet to be projected, but one of the two GOP contenders will win it.) 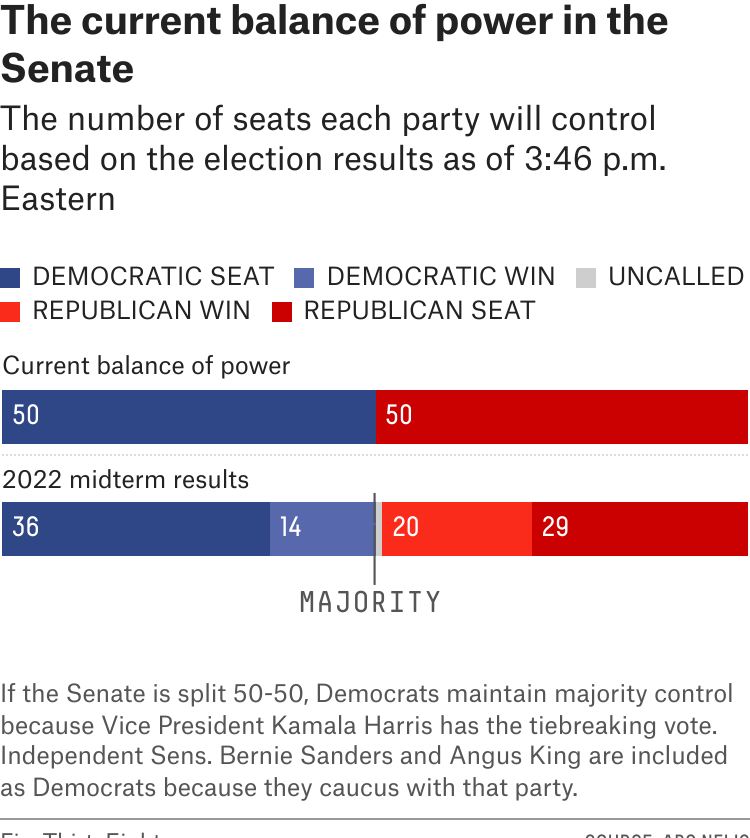 These results are unusual for a midterm election: Coming into the 2022 election, the president’s party had lost Senate seats in 13 of the last 19 midterm elections, with an average loss of roughly five seats. But Democrats will suffer no net losses in the Senate, and after picking up an open seat in Pennsylvania previously held by a Republican, could achieve a net gain of one seat if Democratic Sen. Raphael Warnock defeats Republican Herschel Walker in Georgia’s Dec. 6 runoff. Democrats managed this despite President Biden’s mediocre approval rating and the tendency for voters to sour on the president’s party in midterms. And while Democrats are headed for some losses in the House, they may lose an unusually small number of seats there, too.

Despite all this, the Democrats’ Senate result is not stunning. FiveThirtyEight’s final midterm forecast gave Republicans a 59-in-100 shot of achieving a majority, which was not much better than the chances of correctly calling a coin flip. And while it remains to be seen if Democrats will hold 50 or 51 seats after the Georgia runoff, either outcome would fall well within the 80 percent range of outcomes in our forecast, meaning it was anything but an outlier.

If we look at the individual races, our forecast viewed 10 of the 35 seats on the ballot as potentially competitive for either party, a list that included some incredibly close races like the one in Nevada but also some “reach” seats that each party hoped to surprise in, such as Ohio for Democrats and Colorado for Republicans. But with no seats other than Pennsylvania changing hands (pending the outcome in Georgia), the Senate ultimately will not look that different come January.

The results in the 10 most competitive races according to FiveThirtyEight’s final midterm election forecast, by margin, as of 9:30 p.m. Eastern on Nov. 12


* Incumbent
† Because no candidate won a majority of the vote, Georgia will hold a runoff election on Dec. 6, 2022.


We don’t have final figures from any state — this is normal, as states usually take a few weeks to certify their results — but there are a few notable outcomes in that table. Historically, seats like Pennsylvania — a slightly red-leaning state whose seat on the ballot was held by retiring Republican Sen. Pat Toomey — have rarely flipped to the president’s party in a midterm, yet Democratic Lt. Gov. John Fetterman defeated his GOP opponent, TV personality and physician Mehmet Oz, to capture the seat for Democrats. Democrats managed to retain their seats in Arizona and Nevada, as we’ve mentioned, but they also won by a larger-than-expected margin in New Hampshire, where the polls suggested Republicans might have a shot of defeating Democratic Sen. Maggie Hassan; instead, she won by about 9 points. And in another indicator of the favorable night Democrats had, Wisconsin Democratic Lt. Gov. Mandela Barnes nearly knocked off Republican Sen. Ron Johnson, who won reelection by 1 point.

Elsewhere, none of those “reach” seats really came close to panning out for either party. In Ohio, Republican J.D. Vance defeated Democratic Rep. Tim Ryan by roughly 7 points, only slightly less GOP-leaning than former President Donald Trump’s 8-point victory in Ohio two years ago. Still, Ryan’s high-profile campaign may have helped Democrats down the ballot, as they won three House races in purple or red-leaning districts. In what’s now a pattern in North Carolina, Democrats again suffered a “close-but-not-close-enough” defeat, as Republican Rep. Ted Budd defeated Democrat Cheri Beasley, a former chief justice of the state Supreme Court, by about 4 points. For their part, Republicans didn’t come close in Colorado or Washington.

It’s also worth noting that every incumbent senator on the ballot on Tuesday won reelection (again, except for Warnock, who has to wait until December to find out his fate). Should Warnock win, though, it would be a historic result: Since the 17th Amendment established popular elections for U.S. senators in 1913, there has never been a midterm where every incumbent who sought reelection won reelection. In 1914 — the first midterm following the 17th Amendment’s ratification — no senator lost in the general election, but two Republican senators did lose renomination. This is not to say that incumbents are all-powerful — we in fact know that their electoral advantage has been waning. But given the closeness of this election, it almost certainly helped Democrats’ chances of retaining a majority that they had an incumbent running for reelection in every Democratic-held seat that our forecast viewed as potentially competitive.

But now it’s on to Georgia and the state’s Dec. 6 runoff. While Democrats have won their majority, control of this seat remains very important. Should Warnock defeat Walker, Democrats would have 51 seats, meaning they wouldn’t have to constantly rely on the vice president’s tie-breaking vote, or risk a vacancy that allows a GOP governor to appoint a replacement. It could also make it easier for Democrats to advance legislation that doesn’t fully please moderate Democratic Sens. Joe Manchin of West Virginia or Kyrsten Sinema of Arizona. Not to mention, Democrats are defending a number of seats in red and purple states on the 2024 Senate map, so whether Democrats have 50 or 51 seats could affect the GOP’s path to a majority in two years.

Yet before we turn to 2024, we have to finish off the 2022 election cycle. All eyes will be on Georgia, which will offer an electoral post-Thanksgiving dessert of peach cobbler.

G
ThePollsters Who Will Control The House And Senate? Here’s What We Can Say At 4:30 a.m.

Dec 19, 2022
Geoffrey Skelley
G
G
ThePollsters Republicans Have A Clear Path To Retaking The Senate In 2024

Dec 7, 2022
Geoffrey Skelley
G
N
ThePollsters Are The Democrats Screwed In The Senate After 2024?

Dec 8, 2022
Nate Silver
N
M
ThePollsters Control Of The Senate Could Rest On Abortion And Inflation In Nevada